Many Venus fly trap novice growers have been asking this common question on whether their most famous carnivorous plant should be allowed to flower. However, the short answer is generally a NO for this wonderful plant.

Why Venus Fly Trap should not be allowed to flower?

As perennial plants, Venus Fly Trap will bloom every year. It takes a great deal of energy for the plant to make flowers and if allowed to do so, you will be finding your Venus Fly Trap sluggish for a long time. This is due to the fact that in a cultivating environment, it is rarely ideal and flowering can cause exhaustion to your Venus Fly Traps unlike in the wild, where they could recover rapidly. With this weakened condition, some might even die due to the limited light and humidity compared to the natural condition in the wild. Your plant will look pathetic and pale for months. Besides, they will also be prone to fungal infections which might potentially kill them.

Compared to other parts of the plant, bulbs require and consume more nutrients. Therefore, when there is a lack of nutrients, and the plant begin to struggle and will develop smaller traps. So it is advisable that novice growers remove the flower stalks immediately. If prevented from flowering, most of these plants will grow move vigorously in Summer. 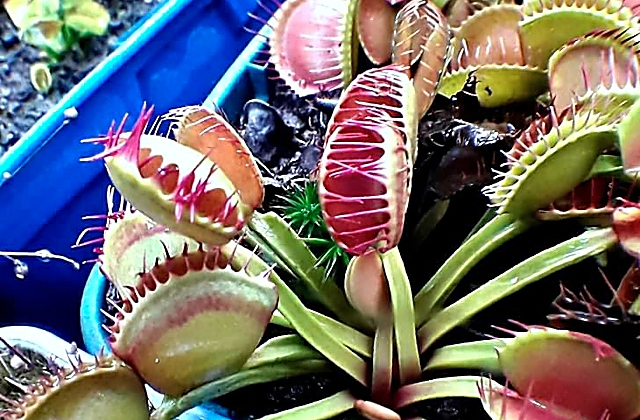 How to know if my Venus Fly Trap is going to flower?

Venus Fly Trap that is fully grown will usually flower during Spring. These plants take a very long time to grow into maturity. It could take between 2-4 years for them to flower. If you noticed a weird cylindrical stem starting to grow from the center of your plant (which doesn’t look like a leaf), then it means that your carnivorous plant is going to flower. This is the young flower stalk which will get taller if allowed to continue growing to eventually become some unimpressive flowers. The flower stalk will usually grows beside a young leaf. Trim it off when it reached approximately 5cm tall, but bear in mind that more will be produced after that. So just continue to remove them.

What if my Venus Fly Trap flowers?

The flowers of Venus Fly Trap are white and has a green veins starting from the petal base. Seeds will be produced if the flowers are pollinated. Unless you are experienced with growing this carnivorous plants and with the intention of harvesting the seed, your plant is better off with the flower stalk removed. However, if you are not fast enough and have not removed the flower stalk and it has grown until the flower buds have begun blooming, then it is already too late to trim it. Just let the flowers pollinate and harvest the seeds for growing new plants.

If you have been growing this plant and have the experience to handle the condition of your Venus Fly Trap when flowering, then you may want to allow your plant to flower as you will know what to do in order to keep your plant healthy during that flowering period.

But if you are just starting out as a novice grower, then it might not be a wise decision to allow your Venus Fly Trap to flower.

This website uses cookies to improve your experience. We'll assume you're ok with this, but you can opt-out if you wish. SETTINGS ACCEPT

This website uses cookies to improve your experience while you navigate through the website. Out of these cookies, the cookies that are categorized as necessary are stored on your browser as they are essential for the working of basic functionalities of the website. We also use third-party cookies that help us analyze and understand how you use this website. These cookies will be stored in your browser only with your consent. You also have the option to opt-out of these cookies. But opting out of some of these cookies may have an effect on your browsing experience.
Necessary Always Enabled
Necessary cookies are absolutely essential for the website to function properly. This category only includes cookies that ensures basic functionalities and security features of the website. These cookies do not store any personal information.
Non-necessary
Any cookies that may not be particularly necessary for the website to function and is used specifically to collect user personal data via analytics, ads, other embedded contents are termed as non-necessary cookies. It is mandatory to procure user consent prior to running these cookies on your website.
SAVE & ACCEPT